Be careful what you shred! 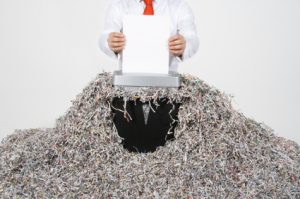 If you fill in a tax return you are legally obliged keep all the paperwork to back it up.

This may include your personal bank statements if the accounts concerned are interest-bearing. You have to keep records going back quite a long way. A company with a 31st March year end may not shred its records from the year ended 31st March 2005 until at least 31st March 2011. An individual needs to have all his paperwork from the tax year 2005/2006 until 31st January 2012.

In spite of this legal obligation, research has shown that nearly one half of businesses do not keep proper records or do not keep them for long enough. Furthermore, it has been shown that this is costing HMRC money because poor record keeping generally leads to an underassessment of tax. Because of this, HMRC will be commencing a programme of business record checks later this year. If your records are lacking, you will have to pay a penalty. The amount of the penalty is not yet known but HMRC say that it needs to be high enough to encourage compliance among those who find record keeping a chore and who would rather pay the penalty than go to the bother of keeping proper records

We will endeavour to keep you updated on further developments. If you require any more information please contact us here at M.B. McGrady& Co.