Real Time Information – Are you ready? 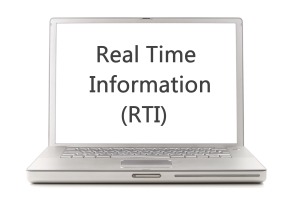 Real Time Information (RTI) is a new system being introduced in April 2013 by HM Revenue & Customs (HMRC) for the reporting of payroll information, which will effectively require employers and pension providers to provide detailed information to HMRC every time employees are paid rather than through the year end return. Under RTI, the employer will be required to submit information; including details of earnings and the tax and NIC deducted whenever a payment is made to an employee.

With the implementation of RTI becoming mandatory without exception between April 2013 and October 2013, RTI will be the biggest single overhaul to the payroll since PAYE was first introduced in 1944. A pilot of the RTI scheme began in April 2012 allowing HMRC to test the system and resolve any problems prior to the mandatory implementation date.

RTI will link with the Universal Credit

One of the main reasons that the RTI system is being introduced so promptly is as a result of the pending introduction of the Universal Credit benefit system from October 2013, which is intended to simplify the system for making benefit payments to the unemployed or low earners.  Under the new Universal Credit system and using the RTI data submitted monthly to HMRC, it will be possible for the benefit payments to be calculated and adjusted for claimants based on their earnings each month, rather than the current system which often leads to errors and abuse.  It is estimated that the new Universal Credit system will reduce fraud and error by £2 billion over five years.  Many commentators believe that this move is long overdue, whilst sceptics suggest this will increase the administrative burden placed on employers and further push the UK towards a ‘Big Brother’ state.

Not to be fooled, RTI will also make the monitoring of PAYE much easier for HMRC as the information will be up to date and accurate.  This will allow HMRC to more promptly identify and pursue those businesses that have unpaid PAYE during the year, avoid recalculations at the end of the tax year and permit HMRC to issue penalties for late payment as soon as the employer becomes liable for one.

Undoubtedly RTI will have an impact on the way information is collated and communicated with HMRC.  The main changes and challenges are:

There are no changes with respect to form P60 that will still need to be provided to each employee at the end of each tax year.  The form P11D which is used to report benefits and expenses for an employee will also continue to be reported separately from the RTI, despite being recognised by HMRC as an area that continues to cause significant problems for them, as well as for employees and employers in the operation of PAYE.  Given that the RTI is being partially introduced by HMRC to help combat the issues caused by operating PAYE codes erroneously on old data, it is disappointing that a new system for dealing with P11D benefits has not been given more thought as part of this initiative.

It is clear that many employers are not prepared for the RTI changes whatsoever.  Indeed, the short deadline for implementation will be a major concern for employers who operate their own payroll and who may not fully understand the changes.  The developers of payroll software will also be endeavouring to ensure all the necessary changes to their product can be made in time.  Those employers with nine or fewer employees will be able to use the free HMRC software package, which will be compatible with the requirements of RTI.  Unfortunately the RTI system will be enforced by further penalties, which have now become a customary feature of the UK tax system.

Given the mandatory nature of the RTI scheme, some employers will be keen to start the process as soon as possible.  The final deadline to volunteer for the pilot is 30 November 2012 for employers using HMRC’s Basic PAYE Tools.  For employers not using the HMRC Basic PAYE Tools, the final deadline to volunteer is 31 December 2012.  To ensure the smooth transition over to RTI, HMRC will be looking to include a wide variety of employers covering a diverse range of business types and sizes, and they will also need to ensure the employer can use software compatible with reporting under RTI.  HMRC will review all applications to join the pilot against these criteria and advise if employers are eligible to join the pilot scheme.

Make sure you seek advice

We would recommend that you speak to your payroll administrator and software provider to ensure that your business is fully prepared for the changes afoot.  For guidance on the implementation of RTI, please do not hesitate to contact us at [email protected].